A comprehensive assessment of Rotorua Museum has shown it falls well below earthquake safety standards and will need to remain closed for the foreseeable future.

The good news is that it can be fixed. How that happens, how long it will take and how much it will cost now needs to be determined.

Rotorua Mayor Steve Chadwick says while the closure of the much-loved museum building is devastating for the community and for Rotorua Lakes Council, public safety is the priority.

“The wait for the results of the detailed assessment has been frustrating for us all but it has been necessary to ensure we have a clear picture of what we’re faced with. We will now need to consider the options for both the building and the future of our museum services and make a decision about how to proceed.

“It is sad to see her closed but our iconic museum and Government Gardens remain popular and our wonderful museum staff and volunteers continue to provide events, tours and education programmes,” the mayor says.

“They’re an incredibly passionate and positive bunch and we’re all very proud of how they have embraced the concept of a museum ‘outside the walls’.”

The result of the detailed seismic assessment – which included invasive testing – assessed most of the building at 15% of the National Building Standard (33% or below is earthquake prone). That means the building will need to undergo substantial work before it could open to the public again.

Assessment of the building by engineers has shown repairs are needed to the roof, there is substantial timber and joint deterioration and there are internal pumice walls which have no steel reinforcement and would be seriously compromised by certain movement.

Caption: This image shows the rating of the building by section. The northernmost extension (red) is rated 15% because of an unreinforced wall connecting it to the rest of the building. The southern (grey) end houses the Te Arawa collection. 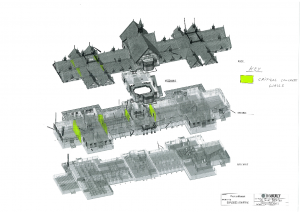 Caption: This image shows the internal walls which were found to have no steel reinforcement.

We now have a clear understanding of what state the building is in,” says Rotorua Lakes Council Chief Financial Officer Thomas Collé, who manages Council’s property team. “That means we can start working with our engineers, architects and Heritage New Zealand to understand what our options are, consider the work involved and the estimated cost of each option to bring back to Council for its consideration and a decision. That will take several months.

“Funding options will need to be explored too but again, it’s too early to guess how much might be needed,” Mr Collé says.

“It’s too early to speculate about what the operational or business side of things will look like in the future,” he says. “We will be working through that during the coming months.”

“Taonga in all but the Te Arawa collection area – excluding some of the marble Summers sculptures which we’ll have removed soon – were moved out and into storage some time ago. The majority of taonga in the Ngā Pumanawa O Te Arawa exhibition are located in the part of the building assessed at 80% so are safe. We are working with iwi, Te Papa, Auckland Museum and other lenders on a plan for the ongoing care of the few remaining taonga that need relocating,” Mr Brown says.

Elected members received an update on the museum in confidential during yesterday’s [Thursday 6 July] Operations and Monitoring Committee meeting. The update was provided in confidential to enable Council to speak with key stakeholders and museum staff before informing the public.

During the next two weeks (school holidays) there are free drop-in crafts sessions at Te Rūnanga Tea House. The museum’s education programmes and daily ‘outside the walls’ guided tours will continue and the Rotorua Museum Art Awards will be hosted at the Sir Howard Morrison Performing Arts Centre from 9 September to 6 October 2017.

What did the Detailed Seismic Assessment (DSA) involve? 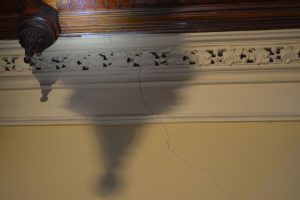 Caption: This image shows the top of a crack in the foyer, beneath the mezzanine floor. 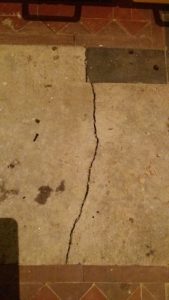 Caption: This image shows a crack in the floor which was beneath a model of the museum.

Caption: A new crack in the ceiling of the mud bath basement.

Where are the cracks?

There are cracks throughout the building with most concentrated in the original parts of the building from the foyer to the northern (rose garden) end.

Can you describe the cracks?

There are cracks down walls on the ground floor of the old part of the museum. Some cracks run from the ceiling to the floor and continue along the floor.

Overhead in the basement walkway there have been cracks for many years and a few of these have widened.

Historically, there have always been cracks in the original part of the museum and these have been monitored for any change. New ones appeared after the Kaikoura earthquake.

Are the remaining taonga in the museum safe?

The last few Summers sculptures will be moved out as soon as we can arrange it – due to the weight of these marble pieces, moving them will require special equipment and expertise.

The majority of taonga in the Ngā Pumanawa O Te Arawa exhibition are located in the end of the building assessed at 80% so are safe. Some taonga will need to be relocated and we are working with lenders and specialists on a plan for this.

How many staff have been affected by the closure?

20 staff were affected by the initial closure and were given the option of taking redundancy. Many were placed within other divisions within Council where there were vacancies and others were employed by local tourism operators who offered their assistance.

A core group of staff were retained to continue providing events, education and holiday programmes and other museum services.

How will the cost of fixing the museum be covered?

That will need to be worked out once Council decides how to proceed – that decision will determine what the cost will be.

The shortfall will instead be funded through the Uniform Annual General Charge ($14.20 per household).

Now that we have the detailed assessment insurance is another matter we will need to work through.

Insurance for council-owned assets is very different to, and much more complex than, other types of insurance so it’s not a simple question to answer.

However, even if we were successful in terms of an insurance payout, it’s unlikely that would cover the full cost. Other funding sources will be needed.