Melvin Vaniman was an American photographer with a tendency towards thrill seeking and risk taking. Under an agreement with the Oceanic Steamship Company, in 1902 – 1903 he travelled to various countries including New Zealand. During this time he came to Rotorua where he took some photographs which are held in the Museum’s collection.

There is a lot that could be written about the exploits of Vaniman but one of his most outstanding achievements was the development of a panoramic camera. This meant that instead of a number of small negatives which needed to be joined together to make the panorama, it only needed one large negative, which is exposed by the camera moving in a circle. As panoramas usually needed to be taken from a height Vaniman would risk his life to climb ship’s masts and other vantage points with his large cumbersome camera to get the perfect shot. He also designed a special portable tower with three legs which could get him to a height of ten metres. Vaniman became known as the Trapeze Photo Man.

He came to Rotorua in April 1902 and photographed amongst other things a panorama of the Waimangu geyser erupting. In total, the Museum holds four of Vaniman’s panoramas of local Rotorua scenes.

This panoramic photograph recently came to light in the collection. This was a very exciting find when linked to Vaniman’s description of his visit to Waimangu which was published in the Sydney Morning Herald in September 1903 after the geyser killed four people:

A Great Geyser –
Description by a Traveller

Mr Melvin Vaniman, a world-travelling panoramic photographer, who recently spent 12 months in New Zealand, making immense photographs of the show places of the islands for the New Zealand Government, was interviewed by a “Herald” representative in reference to the terrible disaster to four people at the great geyser at Waimangu. Mr Vaniman photographed the geyser from a distance of half a mile, and has secured pictures which are in the highest degree instructive.

Mr Vaniman is an American, but, he says that the Waimangu Geyser absolutely surpasses the finest boiling springs in the Yellowstone region. He paid three visits to the Geyser.

On the first day he saw it shoot its immense volume of boiling water, stones, and lava into the air to a height of 400 or 500ft, about 17 times. On the second occasion it spouted four times, and on the third a dozen times, one of the upward shots going about 800ft into the air. Mr Vaniman was accompanied by Mr Donne, chief of the Tourist Department of New Zealand, and the guide Warbrick, who was with the ill-fated party that has just met such a terrible end.

What the tourist says of the place is interesting “The country,” said Mr Vaniman, “is all thermal and the Waimangu Geyser is the culminating grand scene in it. I have seen nothing like it in all my travels. I walked along the edge of the geyser the first time I visited it after an explosion, but I would not do it again. Waimangu Geyser is the safety-valve of the whole district. It is a great funnel-shaped geyser which when quiet is full of dirty water. The lava and stones are at the bottom of the funnel, and when they have packed and wedged themselves tightly at the bottom they form a plug which stops the steam generating below from escaping. Then comes an explosion.”

“Is there any warning?”

“No, there is no warning. The water rises up suddenly, and sometimes out from the main perpendicular shoot of water, stones, and ashes there is a sidelong spout which proves very dangerous to venturesome tourists.”

“What size are the stones?”

They are boulders ranging from pebbles to 100lb weight that are shot up. There are some around which a man cannot lift. The geyser was brought into existence when the great explosion at Tarawera wrecked the pink and white terraces. The country all round is covered with volcanic dust for miles. The tourists in this case were evidently on the dangerous side of the geyser. Warbrick is a most careful man. He and two people were knocked down some time ago by one of the sidelong spouts I mentioned. On a hill about 150ft high on one side of the geyser there is a tourists’ shelter hut. The roof of this is 4in thick in order to afford protection from the falling stones. The cauldron is about 300ft across.”

“Is this one of the geysers that can be excited?”

“No: no bars of soap or stones thrown into the cauldron can make the geyser work. It shoots up its immense volume of water and other matters without the slightest warning. Sometimes there will be days when there are no explosions. Warbrick and Mr and Mrs Burston, of Melbourne, were knocked down by one shoot, so Warbrick must have used every effort to keep those people away from the dangerous spot. They were standing about 300ft away when the accident happened to them.” 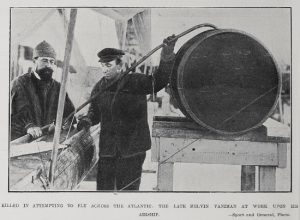 The story of Melvin Vaniman ends tragically. While attempting to cross the Atlantic in a hot air balloon called the Akron it exploded off New Jersey in 1912 killing him, his brother and three other people on board.