We are very excited to launch our new blog which kicks off by celebrating Pacific Island Language Weeks 2017. Over the course of each Pacific Island language week, we will share some of our newfound knowledge, engage directly with our Pacific communities to share treasures from the Museum’s collection, as well as learning about objects that are significant to Pacific communities.

This week is Samoan Language week and the theme this year is, ‘Ma’au i lou ofaga. Maua’a lou fa’asinomaga: Keep your identity alive to thrive’. We’ve drawn inspiration from this theme to share Samoan treasures from the Museum’s collection. More specifically, we explore tatau – Samoan tattooing – through items in the collection, as one of the many ways in which Samoan cultural identity is celebrated and practiced. 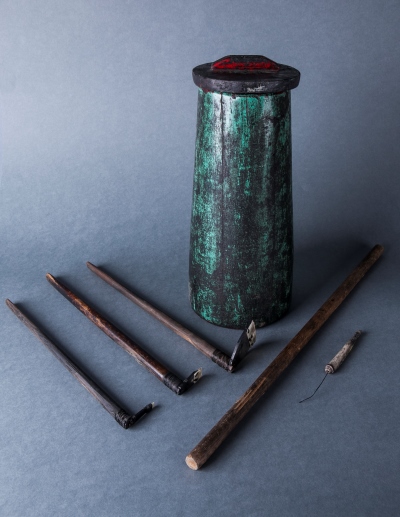 Unique to Rotorua are a collection of tatau tools which belonged to the late Su’a Sulu’ape Paulo II (1949-1999), a renowned tufuga tatatau (tattooing expert). Tufuga tatatau were associated with two ‘aiga (extended families) who have performed tatau for at least 200 years in Samoa – the ‘aiga Sā Tulou’ena and the ‘aiga Sā Su’a from which Paulo descends.[1] We were fortunate to inherit handmade tools used most often by tufuga tatatau of the Sā Su’a which comprise a sausau (tattooing mallet), a tunuma (container for storing au) and a set of ‘au ta (tattooing combs) made by Su’a Suluape Paulo I.[2] This remarkable collection was gifted to the Museum by Paulo II in 1981. 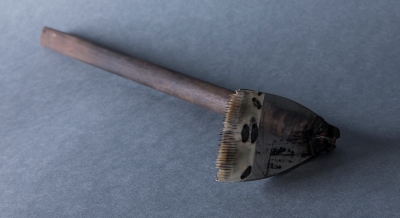 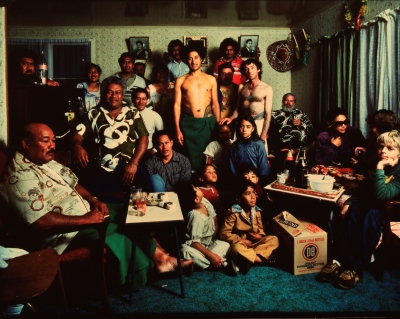 Typically, ‘au have a small bone comb with sharpened teeth attached to a turtle-shell plate, both which are lashed with coconut fibre.[3] However, these ‘au seem to incorporate some contemporary materials, namely coconut fibre has been replaced with nylon fishing line. More research is being completed to identify the material of the plates which may likely be made of a type of synthetic material. Each ‘au are made to different widths to provide a different quality of line. The widest comb (x -604) is used for filling in large dark areas of the tatau, while narrow combs are used to make fine dots and motifs. Tattooing is achieved by dipping the ‘au in pigment then the sausau is used to strike the ‘au to deposit the pigment into the skin.[4]

Paulo was a brilliantly skilled tattooist who often negotiated the boundaries of customary practice; at times seen as controversial for notable moments such as bestowing Europeans with pe’a (Samoan male tattoo). One such moment is captured in another collection item, a photograph by artist Mark Adams titled 10.5.1980. Grotto Road, Onehunga, Auckland. The evening of the umusaga for Fuimaono Norman Tuiasau. The image depicts artist Tony Fomison and his friend Fuimaono Norman Tuiasau at an umusaga, a finishing ceremony that celebrates the completion of their pe’a.

Art historian Peter Brunt argues that, for Fomison, receiving his pe’a signified his commitment to other cultures. However, marking European bodies with tatau directly implicated the customs associated with soga‘imiti, that is, recipients of tatau who hold responsibilities to perform duties for matai (chiefs) at events.

This is only the beginning of our work towards exploring indigenous cultures – in all its beauties and complexities – to keep identity alive to thrive at Rotorua Museum Te Whare o Te Arawa. Watch this space…