A mystery photographer on the Rotorua tour

Rotorua Museum has a collection of about 40 glass plate negatives all taken by an unidentified photographer between January and March 1912. They show groups of tourists, all in their heavy Edwardian clothing in the summer heat. Some are standing on Hinemoa’s Steps taking in the sights of Okere Falls, or in the Tutea caves, or at the Power station, or else in overloaded punts at Hamurana Springs. It appears the photographer followed the tourists, but who that person was is still unknown.

I was keen to find out about the tourist trail that led people to those places in 1912. I discovered that travel agent Thomas Cook offered a trip to Okere, Hamurana and Tikitere. It was regularly advertised in the New Zealand Herald and Evening Post in 1910 and 1911[1]. Tourists would travel by train to Rotorua then catch a bus and a launch to see the various “Wonders”. 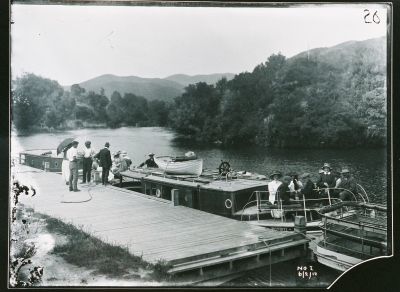 I also found accounts by travellers who took that route around that time. [2] [3] Here the route is described, a bit earlier, in 1907:

“Another round trip of quite a different character is that of the Hamurana Spring, thence to Okere Falls, and thence back to Rotorua by way of Tikitere. A conveyance leaves the township for the lake at ten o’clock, and there launches are in waiting to proceed across Rotorua to the Hamurana Spring, and sometimes a call is made at Mokoia Island en route. Arrived at the jetty, a short walk alongside a lovely creek with marvellous blue coloured water, brings the tourist to within a hundred yards of the spring, and from here boats are utilised. The boats are taken right over the spring which wells up in a cavity some ten feet in diameter and of great depth. Looking down into the pellucid water, its immense depth can be seen, while the air bubbles keep portions of the surface in a constant state of effervescence. So powerful is the up rush of water that coppers thrown in are suspended for hours, and eventually are thrown out on the edge of the spring.” [4] 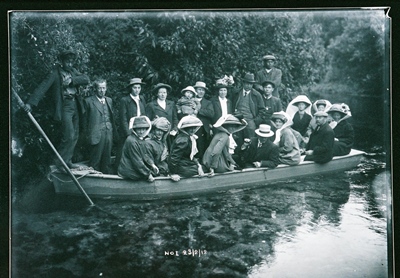 The account continues: “From Hamurana the launch proceeds across the lake, and then enters the Ohau channel and emerges into Lake Rotoiti, a lovely sheet of water for the most part surrounded by bush-clad mountains and backed by the majestic Tarawera. Okere is situated at the head of an arm of this lake, and here the passengers are landed and refreshments are partaken of at the accommodation house. Thereafter a five minutes’ walk enables the beautiful Okere Falls to be reached, and close alongside them is the power-house, which supplies the electricity with which Rotorua is lighted.” [5]

In total these visitors usually spent two or three days in Rotorua before returning to Auckland by train. The second day might be spent visiting Whakarewarewa or Te Wairoa.

The two photographs below were taken on the same day and you can see some of the same people in both. Don’t they look like they’re having fun! 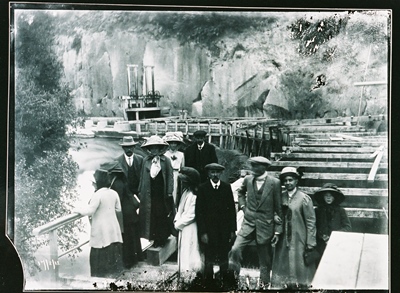 Our collection is full of such gems which require further research. This story made me want to know more about tourist photography in this era. Did the photographers work for Thomas Cook or were they self-employed? Did they travel with the group or was a different photographer based at each site? I am very keen to hear from anyone who might know who this photographer or photographers were or who can answer these questions.