How to Build a Bath House: designing and building the Rotorua Bath House 1902-1908

The grand old bathhouse presides over the Government Gardens; its central tower rises out of the ground with its wings outstretched to embrace the surrounding landscape. 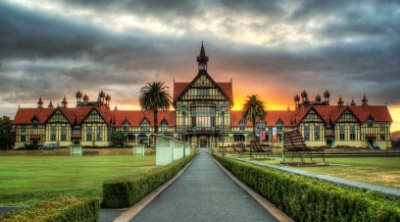 109 years ago the designers and architects of the Rotorua Bath House could not have foreseen the extent of discussion, debate and changes to their building. It has had many lives, and today its future is being questioned as the reality of an old building meets the demands of modern times. This blog takes us back to the unique inception of the Bath House – before it became the most iconic building in Rotorua.

In the early 1900s Rotorua entered a period of growth that saw major Government spending on infrastructure. The Government and businesses’ used grand architectural statements to cement their position within a growing society.[1] Since the late 1870s, a Government scheme to develop a health spa in Rotorua was planned but it did not take shape until the 1900s. [2] The Government Gardens, with the Bath House as the focal point, are one of the lasting landmarks from the scheme to become the destination for health tourists in the Southern Hemisphere.

The Bath House was designed in 1902 by draughtsman W. J. Trigg, architect J .W. Wrigley, engineer B. S. Corlett and Government Balneologist, Dr Arthur Wohlmann. In preparation for his new position, Wohlmann travelled through Europe to gather design ideas for Rotorua’s health spa resort. He envisaged “…a really first-class watering place” in order to attract international clients.[3] This did not include a large cold marble monument typical of European spas, but instead a building that resembled the “homely timbered buildings of Nauheim [near Frankfurt]…”[4]

The final plan was a large structure displaying the revived architectural styles of the English renaissance – Tudor, Elizabethan and Jacobean. The choice of a half-timber building was unusual for Government funded builds, which typically utilised classical architectural styles. One notable style concession was made for New Zealand’s climate, which was the inclusion of verandahs on either side of the central hall to allow for the promenading of visitors and clients. 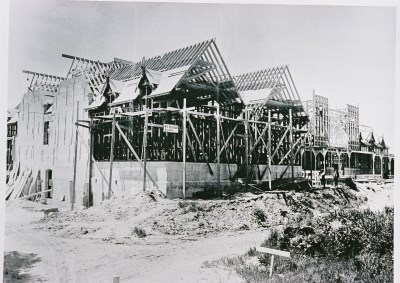 To allow for Wohlmann’s specifications, the building was designed in a rough ‘E’ shape with a central hall and two identical wings; one to the north for men and one to the south for women. [5] Each wing was divided into smaller rooms, for baths, waiting rooms and cooling rooms.[6] It was hoped that these facilities could accommodate 1,000 clients per day.[7] The central hall was intended as a meeting place and waiting room – design elements added a sense of luxury and grandeur, including a double height roof and fountain.[8]

The Department of Tourist and Health Resorts funded this project and as a requirement all plans had to be signed off by the Government Architect, John Campbell. Research has highlighted tension between Corlett and Campbell over the plans. Correspondence shows disagreement over the way that iron rods were incorporated into the foundations. Corlett concluded that Campbell’s changes were too expensive and received too late as the foundations had been laid.[9]  He also raised concerns over connections between the central hall and wings, identifying that the collapse of one section could possibly drag down other sections. We are unsure whether these concerns were taken heed of by Corlett. Ultimately, Campbell’s concerns were well founded and within the first year of opening cracks appeared in the foundations.[10] 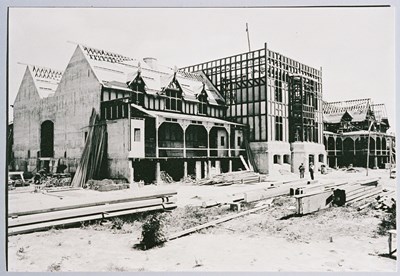 The decision to use wood and concrete rather than stone was economically driven, as suitable stone was not available locally.[11] The first floor was made from timber whilst a concrete mix made with local pumice was used to make the foundations, perimeter wall, and ground floor. The walls are half height concrete with Tudor styled timber wall framing with pumice concrete infill slabs, and lead windows. The open framed hammer beam roof was made from native timber, meaning that the timber is open to view from the interior and not hidden by a ceiling. The roof was constructed of timber panel sarking and Marseilles clay roof tiles (originally Bridgewater Roof Tiles).[12] The native wood used was predominantly kauri and tōtara, which triggered some discontent as local sawmills were unimpressed that locally milled rimu was not used exclusively. 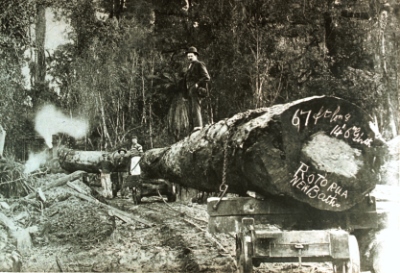 Auckland builder William Elkin Hutchison won the tender and began building in January 1906.[13] By 1908 the project had gone over budget and mounting pressure from the public and Government pushed forward the opening of the building, despite the south wing only being partially finished. On the 13th August 1908 the Bath House was officially opened by Rear Admiral Sperry of the U S Navy’s Great White Fleet.[14] Although Wohlmann’s dream was never fully realised the Bath House was successful for the first few years.

This research has highlighted that Wohlmann and the architects were well intentioned and strived to design a world-class facility. However, our accumulated experience, knowledge and technology , which the original architects could only dream of, enables us to look forward to the possibilities of the building’s future. The Bath House continues to signify a unique example of New Zealand architecture, one that highlights how our early architects borrowed British styles and altered them to suite the climate and their purpose.