The 11th of November is Armistice Day, the date that is commemorated around the world as the official end to World War I.

To mark Armistice Day, and remember all those soldiers who died as well as those who were treated in hospitals far from home, I will focus on a key object in the Rotorua Museum Social History collection. It is a well-travelled Red Cross ‘autograph’ quilt which went from Rotorua to Europe and back to arrive at Rotorua Museum in 2003. 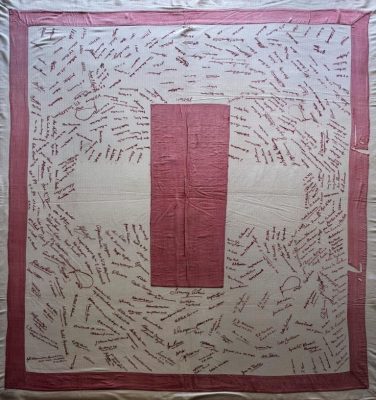 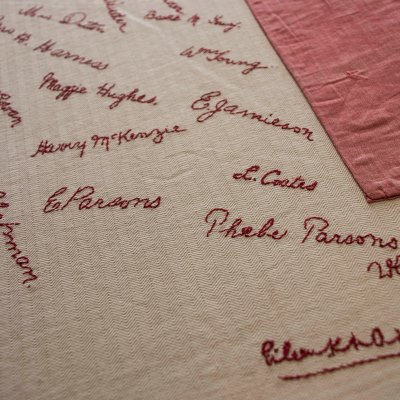 Newspapers of the time mentioned quilts that were made up of small sections which were assembled later. The top of our quilt however was made in one piece. This snippet from the Lake Wakatipu Mail of 25 July 1916 describes the fundraiser:

Unfortunately no local Rotorua newspapers survived from the World War I era, so we may never know which hospital our quilt was sent to.

Other museums around New Zealand hold similar quilts, such as this one in Oamaru.

On our quilt, which is really a bed cover as it contains no wadding, part of the red cross is now missing and the red border is worn but beautifully repaired. The wear, which is on one side only, might indicate the part of the bedcover that was tucked in behind a bed rail or something similar. There is a kiwi in each corner. The red colour of the fabric is fading but the signatures are clear and mostly readable. Don Stafford, the former Rotorua Museum Director, went to the trouble of transcribing all the names on the quilt, which amount to about 400 and can be found here: Names on WW1 Quilt in alphabetical order

Our quilt has an interesting story after World War I. It was acquired by an English woman after the war along with another quilt. In the 1970s she wrote to the Otago Daily Times as there must have been a Dunedin connection evident in the other quilt. She wanted to return them to the place they had come from, so sent them both to a woman in Dunedin who replied to the advertisement. She passed them on to another local – Jessie Irving, who had also replied. Jessie had recognised the names of her parents and grandparents, aunts and uncles. Jessie’s grand-daughter later carried out research on the second quilt showing there was a Rotorua connection. She offered it to the Rotorua Embroiderer’s Guild who kindly passed it on to the Museum. Don Stafford recognised some of the names as local ones. The quilt is now stored on a large padded roll in our climate controlled storage facility.

We would like to hear from you if you have connections to anyone named on the quilt and may organise a one-off viewing if there is interest.