Amongst the air conditioning vents, turrets and tiles on the southern rooftop of Rotorua Museum is a very unusual item for such a space. 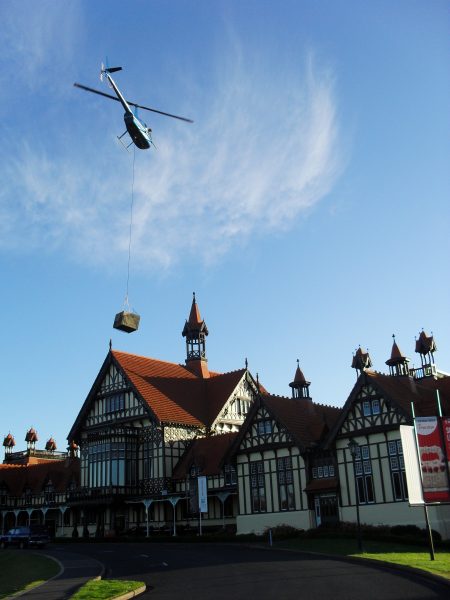 In mid December 2013, after a short helicopter flight, a hackbox destined to become home to three very cute kārearea chicks was delivered to the roof of Rotorua Museum as part of the first ever urban release of a threatened species – our native New Zealand falcon (kārearea).

Rotorua is lucky to be the home of New Zealand’s National Bird of Prey Centre, Wingspan. Surrounded as it is by forestry activity and an understanding forest management company, Rotorua also provides an environment that is helping secure the future for our precious falcon. These two things combined with the safe nature of Rotorua’s Government Gardens and iconic architecture of the Bath House make Rotorua Museum and Wingspan natural partners in the On the Wing project. This project aims to help New Zealanders and visitors get to know our one and only native falcon. 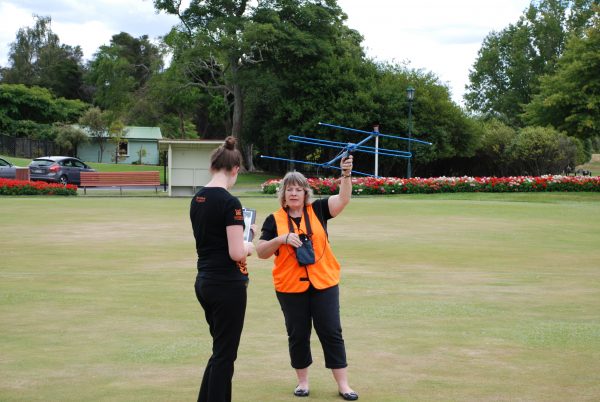 As well as education, a major goal of the On the Wing project was to establish a breeding pair in the wild within 5 years. The project has been so successful that our volunteers radio tracking released chicks, were originally asked “What are you doing?” and are now asked “Where are they?”.

We also have a successful kārearea pair breeding in the Whakarewarewa Forest as I write. This season is the third season that Hatupatu and Maia have nested. Their site of choice is a north facing cut over forestry block, with a magnificent view down a long valley full of small exotic birds that make ready prey and provides plenty of safe nesting sites. This site is on a direct flight path back to the Government Gardens which they loudly proclaim to be their domain each time they return.

Although both Maia and Hatupatu are successful hunters, the day old euthanized cockerels volunteers put out for the falcons mean they are keen to continue their visits to the Museum and gardens several times a day. Life is not too hard for them, particularly over winter when prey is in shorter supply. It also means city dwellers and visitors have frequent opportunities to see and learn about these intelligent birds from Museum guides. 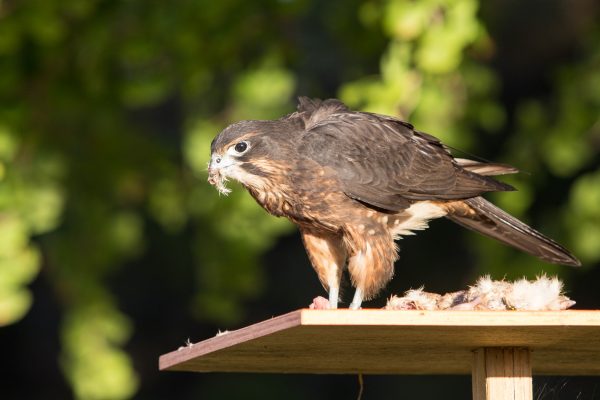 Hatupatu and Maia have become the darlings of the kārearea world. Hatupatu well named for a Te Arawa ancestor who was a great warrior and hunter and Maia whose name means brave, bold, capable and confident, are the product of the first and second release of kārearea from Rotorua Museum. Hatupatu turns 4 this month and Maia 3.

Hatupatu first spotted Maia and her sister as they learned to take flight around the rooftops and turrets of the Museum. He quickly assumed the role of father and spent the early days of summer instructing them in flight and teaching them how to hunt. The antics of the three falcons provided many many fruitful hours of photography for enthusiasts. 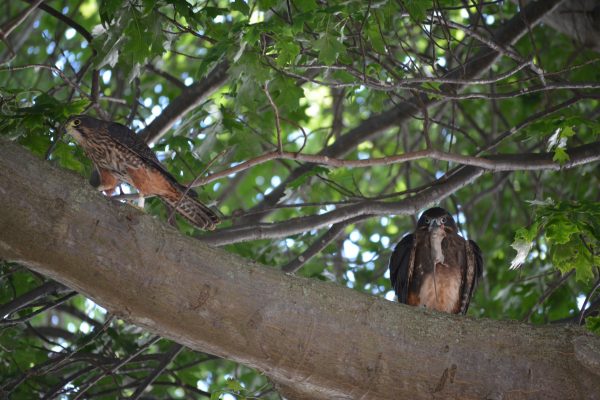 Adolescent falcons are playful. As they learn about the world around them sticks and leaves become playthings simulating the skills they will need in hunting their own prey. One of the most amazing sights is the ‘food pass’, where the adult drops prey mid-flight encouraging the juvenile falcon to catch the food mid-air.

Each falcon release has been different. Our first saw the three siblings spend several days around the rooftops before they ventured further afield and spent many days playing on and around the bowling and croquet lawns. Later releases saw the birds take flight earlier and struggle to return to their rooftop hackbox home at the end of the day. Each chick definitely has its own personality! 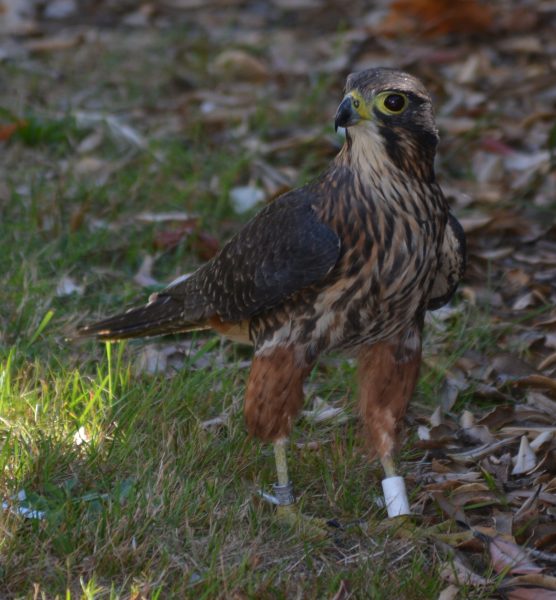 Hatupatu is the sole surviving falcon of the first release. His brother, Tama, died many months after release, probably by electrocution, which is one of the biggest threats for falcon as they alight on older power poles with uninsulated transformers. Their sister and Hatupatu’s favoured companion, Te Rangirere I Waho (named after Maureen Kingi a Miss New Zealand and Rotorua City Councillor), was shot and had to be euthanized.

Unfortunately some New Zealanders still do not understand that this beautiful threatened species deserves our support to ensure their ongoing existence, despite the odd loss of a dove or pigeon. There are only between 5,000 to 8,000 estimated to be in existence as compared to about 40,000 kiwi and the species does not exist anywhere else in the world.

Maia is also the sole survivor of her clutch. Her sister Kurangaituku (named after the bird woman who held Hatupatu captive) is also thought to have been harmed by human hand.  Ihenga from our third release has been spotted towards the southern end of the city. However, his sister along with 75% of young falcons in the wild, died before making her first birthday. 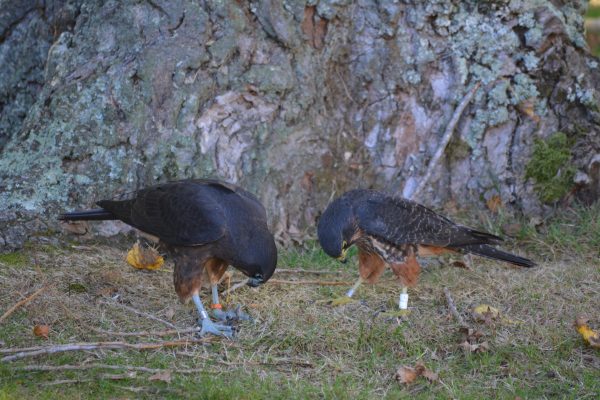 Hatupatu and Maia have been very successful parents; in two seasons they have produced 3 clutches of chicks. One male, Te Huatahi, in the first year and two males followed by an “unheard of” (according to Wingspan) second clutch of one male and one female. Avid falcon watchers, who have observed Hatupatu from the time he hatched, discovered the second clutch of chicks late in the last breeding season. Fondly named Speckles and Teresa, their growth and interaction with their parents and their territory have been followed ever since. Teresa was reluctantly evicted from the parental territory well into the current breeding season.

As I write, the story takes on a sad note. Hatupatu and Maia have abandoned this season’s nest leaving two eggs that hopefully Wingspan will be able to tell us more about. The nest may have been built too close to mountain bike and foot traffic with disturbance too frequent to continue nesting or maybe nests that we haven’t been aware of have been abandoned in the past and we just didn’t know about them. The pair are still mating and it’s not too late in the season for another clutch.

Hopefully the story will long continue meanwhile I leave you with one of my favourite photographs. 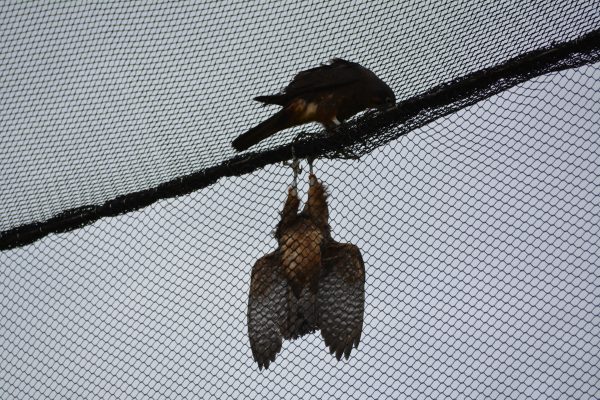