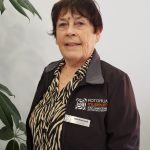 Meet Neila Blackmore, one of our enthusiastic new Outside the Walls Walking Tour guides. Before undertaking her guide training, Neila thought she knew all about the Government Gardens.

From her home in Pūkaki St, and her parents restaurant, The Empire, the gardens were Neila’s playground. Here is her story.

Although I thought I knew most of the history of Rotorua, the Government Gardens and surrounds it was fascinating to learn even more.  I know more of pre-European history and learned that we probably shouldn’t have swum in Sulphur Bay due to the high acidity of the water! ‘In my day’, we were not aware of the dangers!

I’ve always been fascinated by bird life and I now know a lot more about the birds of our Sulphur Bay Wildlife Reserve. I found doing the additional research into the birds found there, was really worthwhile and interesting.

My childhood memories in Rotorua are many.

We lived in Pukaki Street and my earliest memory is learning to tell the time by the post office clock.  We had an almost uninterrupted view of this from our house.

We played in all the trees in Pukaki Street and ran riot in Arawa Street where my parents had the Empire Restaurant, where the old IRD and Rotorua Review offices were (the Zen building). I remember the old kuia and kaumatua sitting outside the old Māori Land Court, then coming to my parents restaurant, with hardly a word of English.

Our playground was the Government Gardens. Playing on the memorials (a no no today), at the band rotunda, and on the geothermal feature that once stood behind the current council buildings. We visited the old gardeners house (my sister and the daughter of the house were friends) and walked through the scrub to the changing sheds at Sulphur Point to swim.

We also played on and around the old hospital foundations and I remember having a mud bath at the Bath House. I believe we were spoilt there, as my mother was a regular user of the mud baths after a hard week at the restaurant.

I did all my swimming at the Blue Baths, belonged to the Arawa Club, and have many happy memories there also.

My grandfather’s name was Sidney Benjamin Taylor and he was the first permanent photographer of the Government Tourist Board from 1912 to 1925. He was the official photographer for the Prince of Wales tour in 1920. He also spoke fluent Māori. 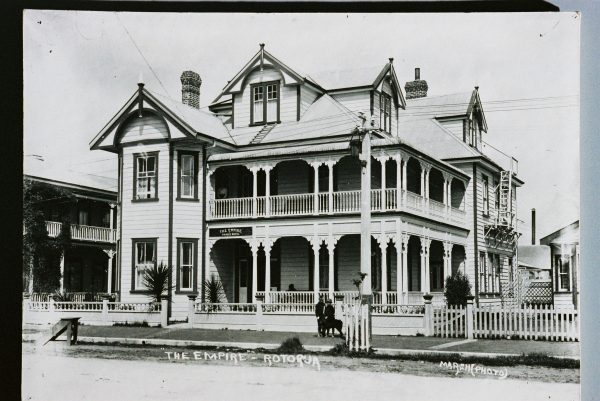