A rich history of Royal visitors to Rotorua

Rotorua has a long history of putting on a good spread and a good show for members of the royal family. Rotorua has warmly welcomed the following royal family members:

So it has been a while since we had a royal visit and the Duke and Duchess of Sussex (Prince Harry and Meghan) will no doubt be as eagerly welcomed as all the others have been.

All the royal visits, especially the early ones, have had recurring themes – huge attendances, Māori performances, great catering, generous gift-giving, walks in thermal areas with a guide, and private moments away from the cameras.

The 1901 visit by the future King and Queen featured a gathering of 5,000 Māori at Te Arawa racecourse whose haka was believed to have created an earthquake during rehearsals. The couple were shown around Whakarewarewa by Guide Maggie Papakura. The new Prince’s Gate into Government Gardens was illuminated using electricity which had just become available in Rotorua (but only at night). The Duchess opened the Duchess Baths in Government Gardens.

They were given dozens of presents as they travelled around New Zealand. The Duke recorded in his diary that the gifts were “piled up in a heap in front of us, they consisted of greenstone meres, whale bone meres, whale bone paddles, carved sticks, feather cloaks innumerable, mats and other cloaks, also reed kilts.” On their return many of the gifts were placed on permanent loan to institutions in the UK.

In 1920 the Prince of Wales came to a gathering of 5,000 Māori at Arawa Park. The catering included 14,000 fish, 85 barrels of mussels, as well as 300 sheep and 30 cattle per day. The Prince received a number of items of taonga including several fine whāriki (mats), two taiaha, a kahu huruhuru (feather cloak), and a small mere. It rained almost the entire time but despite that the Prince seemed to have a great time. He escaped out the back of the Grand Hotel with 3 of his staff to have his first ride on a merry-go-round which was across the road. 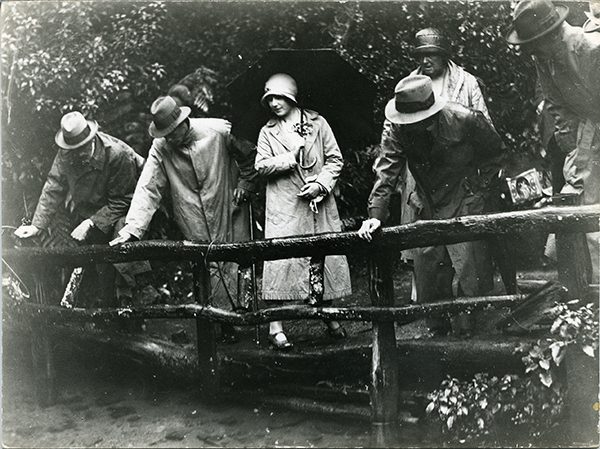 In 1927 the Duke and Duchess of York also saw a massive turnout at Arawa Park. One day they again escaped their hotel by car for a few hours of freedom which included picking and eating blackberries by the side of the road. The couple also formally unveiled the Te Arawa Soldiers Memorial in Government Gardens and fed trout at Fairy Springs.

In 1954 the Queen made her famous tour of New Zealand during which huge numbers of people lined roads all over New Zealand to see the royal couple. They stayed at Moose Lodge on Lake Rotoiti and also attended a reception at Arawa Park. A crowd of about 40,000 gathered in Rotorua from the surrounding areas to see the royal couple – this was four times the Rotorua population at the time. Again the Queen did a thermal walk around Whakarewarewa with Guide Rangi, who invited them to slip away from their minders and enjoy a cup of tea at her house.