For World Environment Day we will consider the possum, introduced to New Zealand for its fur in 1837. Possums really took to New Zealand conditions and have caused serious damage to both plants and birds in New Zealand since that time.

We recently unearthed an interesting letter concerning a possum in our archive. It was from Governor Sir George Grey to a girl called Miss Florence Mair of Auckland in 1883. It seems that Governor Grey had sent her a possum for a pet from his island of Kawau north of Auckland and he describes how to look after it.

“My dear Miss Mair, at last we have caught a possum for you. It is young but not yet quite tame. Do not therefore touch it for some time until it knows you. It will eat fruit, bread [?], and all kinds of vegetables, cake, biscuits, and good things. It goes to you in the ‘Rose Grey’ steamer this day. Its passage – a cabin passage – for so distinguished a traveller, is paid for. Truly yours, G. Grey.” 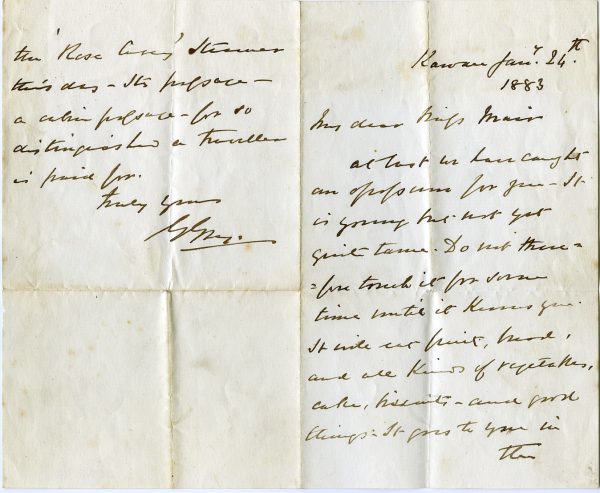 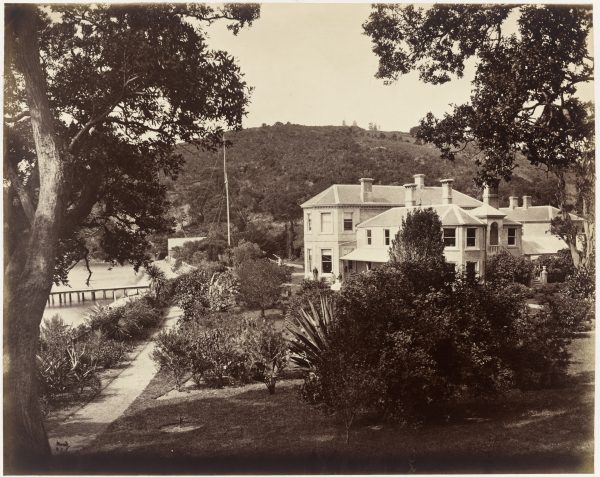 Sir George Grey’s Mansion House on Kawau Island showing some of the tropical plants, however no photos seem to exist of the animals he kept there. Mansion House, circa 1870. Photograph by D. L. Mundy (1826?-1881), Auckland Libraries Heritage Collections (755-Album-88-3).

An in-depth article about Grey and Kawau can be found here.

A description of a recent visit to the island now can be found here.

More information about possums in New Zealand can be found here.