The History of the Rotorua Museum Art Awards

The Rotorua Art Awards as we know them were started by the Friends of the Rotorua Art Gallery in 1983. Before this there had been an annual exhibition award that was run by the Rotorua Society of Arts. The Arts Society evolved from a sketching group which was set up in 1946 by Wilfred Stanley Wallis. 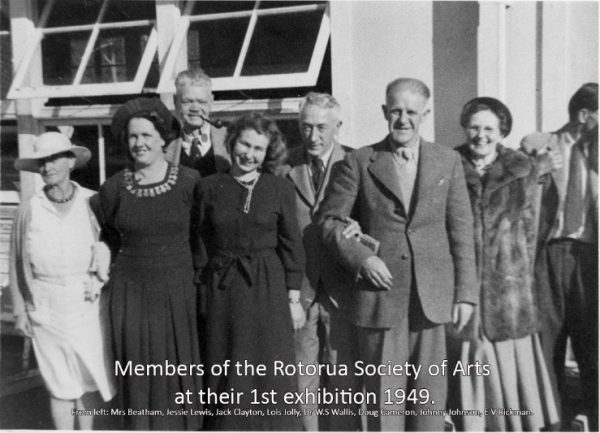 From 1949 the Rotorua Arts Society held their annual exhibition at random venues such as the Ritz Hall, the walkway between the Sportsdrome and the Bath House and a selection of halls and even outdoor displays as they didn’t have a permanent headquarters until eventually the Rotorua Art Gallery became available. These annual exhibitions consisted of mainly local Bay of Plenty artists as well as invited guest artists from the big cities. This also attracted criticism of course and there were harsh words written to the paper regarding the winning works.

Ian McMillan wrote in his committee report in 1958 that “ …one of the fascinating things about painting is the varying points of view, the natural controversy”. 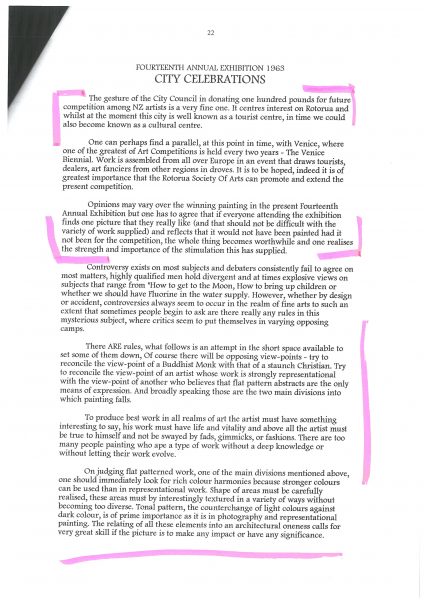 An annual prize of 10 guineas was offered for the first time by patron Dr R S Edward for the best subject using forms derived from the Rotorua District at the thirteenth annual exhibition in 1962. The Supreme Winner of the Rotorua Museum Arts Awards this year will receive $10,000.

Initially the selection of successful entries was carried out by the committee but later on the works for the final exhibition were selected by a judge or panel of judges from outside the Rotorua district. Para Matchitt was part of a panel of selectors in 1964 and in 1978 Dick Frizzell was the judge for the 30th annual exhibition which was displayed for the first time in the Rotorua City Art Gallery. This also happened to be the last annual show because in 1979 and 1980 it turned into the Air New Zealand Civic Art Awards where yet again there were opposing opinions about the winning entry.

In 1979 the seed was sewn to create a group called Friends of the Gallery. It was suggested that the Art Society have a tutorial role in the arts because there were members who supported the arts, and attended openings and exhibitions but were not necessarily artists. When at the AGM in 1980 there

When there were no nominations for the ten places vacant on the committee the Society of Arts went into recess. That same year the Friends of the Rotorua Art Gallery began to undertake the support role previously performed by the Art Society with a committee primarily composed of former Art Society members. 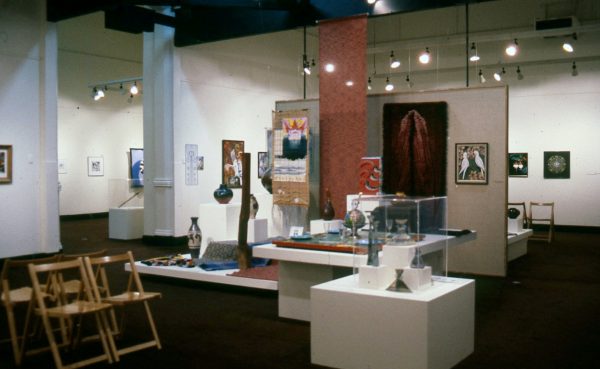 Over the summer of 2006/2007 and 2008/2009 the Rotorua Artists Award were held at the Rotorua Arts Village Experience (RAVE). This was organised in conjunction with the Friends of the Museum and the committee and staff at RAVE. The purpose of organising the 2007 exhibition was to continue to give Rotorua artists an opportunity to showcase their art work in a gallery environment. The entire Arts Village was emptied including the pottery studio. The walls were given a fresh coat of paint and the decision to include all of the entries for the exhibition was met with mutterings of disapproval and criticism. The show was a great success as usual with the help of volunteers and the generous sponsors.

Since the Rotorua Artists awards have returned to Rotorua Museum Te Whare Taonga o Te Arawa from 2013 as a must-see biennial exhibition, the Rotorua Museum and the Friends are proud to keep giving Rotorua artists the opportunity to showcase their art works. 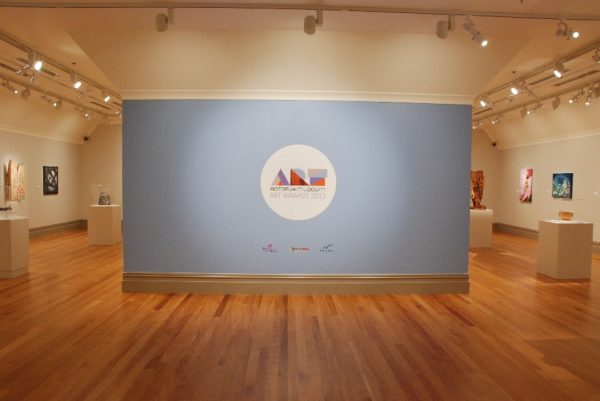 There have been a few changes over the years with the entry conditions, prizes, sponsors and categories but essentially the awards run by the Friends of the Rotorua Museum have been a highlight for the Museum team who strive to make the awards something special for our local artists, even though the winning award and finalist selections will always bring critique as all art should.

Entries for the 2019 Rotorua Museum Art Awards close on Monday 30 September 2019. For more information and how to enter visit www.rotoruamuseum.co.nz/artawards

The Rotorua Museum Art Awards Finalist Exhibition will take place at the Energy Events Centre, Rotorua, from 23 October until 10 November 2019.

The Salon des Refusé exhibition of works not selected for the finalist exhibition is on display at The Pop Up Shop (1201 Eruera Street) from 2 -17 November 2019.