Through 21st century eyes this seems like a quaint and old fashioned practice but in the mid-20th century, life was different and this type of collecting made very practical sense.

Gathering items for the bottom drawer would have been commonplace for most young New Zealand women from the 1930s to the 1960s. Other names were ‘glory box’ (especially in Australian and New Zealand), ‘hope chest’ (especially in the US and Canada) or ‘trousseau’.

Sometimes it was a physical piece of furniture, like a camphor chest [2], and sometimes just a collection of items put away somewhere….  for a hoped-for married future.

The Norma Evans collection, which makes up a large and important, part of the Rotorua Museum’s social history collection, includes items Norma made and saved for her bottom drawer in the 1940s.

These were stored in a chest of drawers which is also in our collection. “I bought it in 1942-1943 for my bedroom, clothes and bottom drawer.” [3] That was before she even met future husband Bob. 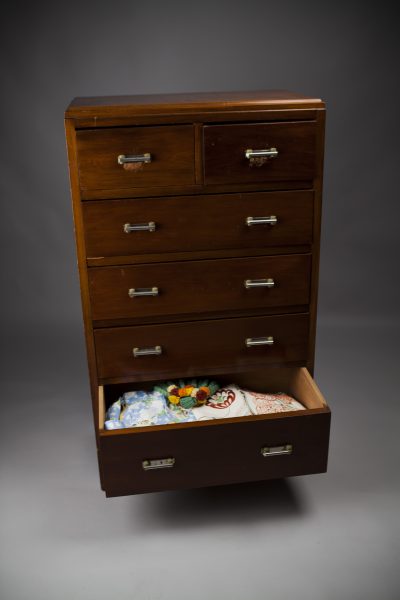 Back then, items for the home were extremely expensive compared to today. Young women were paid less than men and in some occupations were expected to give up work after marriage.[4] It was necessary to save hard for household items or to put them on layby. [5] It was also fashionable, and cheaper, to make and decorate some items yourself, such as embroidered table cloths and knitted tea cosies.

Embroidered table cloths and tray cloths and the like came ready-printed with a design to be embroidered. Even then, it was not necessarily cheap. In the 1930s an unworked tablecloth with a printed design ready to embroider, plus thread, cost almost as much as a week’s wages for a woman. [6] Norma was an accomplished embroiderer as can be seen from this tray cloth. Norma’s mother also made items especially for Norma’s bottom drawer. It was common for other female family members to contribute items they had made, which added extra sentimental value to the items. [7] 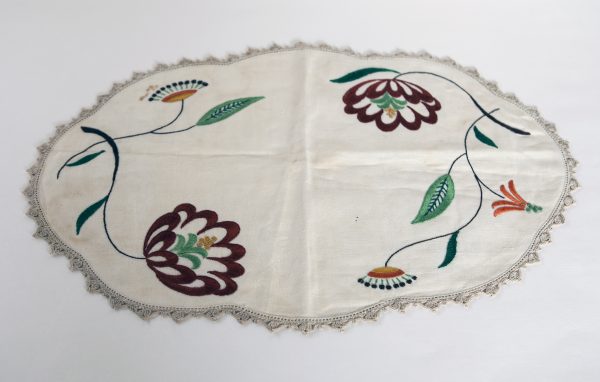 This tray cloth was made by Norma from a Semco ‘kit’. Norma did the embroidery and her mother Maud did the crochet edge. Linen tray cloth, 1944. Norma Evans Treasures Collection. Rotorua Museum Te Whare Taonga o Te Arawa (2005.146.52)

Norma started her own dressmaking business at age 18. She saved money from her earnings, and from the ‘linen man’ who went door to door, she bought “some white cotton sheets, both single and double sheets, some pillow cases, with four tape ties, and some white towels… The linen also went into the ‘bottom drawer’ and I added the embroidered supper cloths, tray cloths, duchess sets that I had made”. [8] 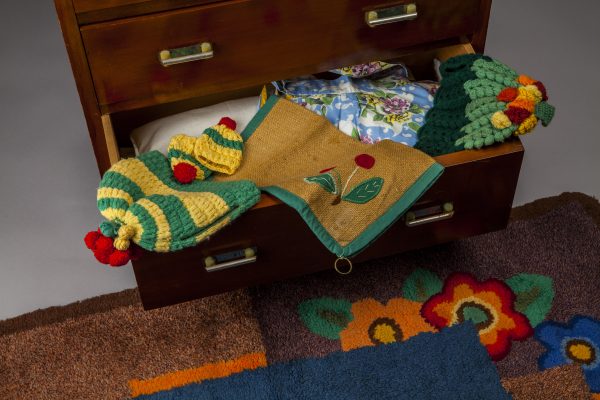 An assemblage of items from Norma’s bottom drawer, from left to right, a set of cosies for teapot and eggs, a pot holder, an apron made by her mother, and a tea cosy. The rug on the floor was made by Norma’s father in 1940 from recycled 1930s woollen jumpers. Wool mat, 1940. Norma Evans Treasures Collection. Rotorua Museum Te Whare Taonga o Te Arawa (2004.2.137)

In 1945 Norma became engaged to Bob Evans, a returned World War II soldier whom she married in 1946, aged 22. Young women were expected to marry in their late teens or early 20s. According to Norma, “It was usual for girls to be going steady, engaged or married by the age of 20, 21. If not, she was considered to be “On the shelf”. [9] Of course some girls who put items into her bottom drawer were not successful in finding a husband and they remained unused.

Young women would also put their 21st birthday presents into the bottom drawer, and this is what Norma did too. For Norma’s 21st she received a variety of practical presents for her future married life, as she was ‘going steady’ with Bob by then. They included a pokerwork bread board, a silver scone fork, a marquetry vase, a fancy cup, saucer and plate set, some ornaments, a bevelled edge mirror and alarm clock. Norma said: “Most of these gifts went into my ‘bottom drawer’.  Every girl built up a trousseau for the day she married.” [10] Many of these items, and techniques to make and decorate them, are incomprehensible to us today, especially to 21 year olds.

The importance of marriage to young women should not be under-estimated. According to Rosemary McLeod in her book ‘Thrift to fantasy’, getting married was important. “It was not possible to live with a man without marrying him; it was not possible to have an active sex life while unmarried without risking social ostracism and pregnancy; it was barely possible to have a social life, once you were in your 20s, without a husband to accompany you; and after you were 30 you were considered to be umarriageable.” [11] 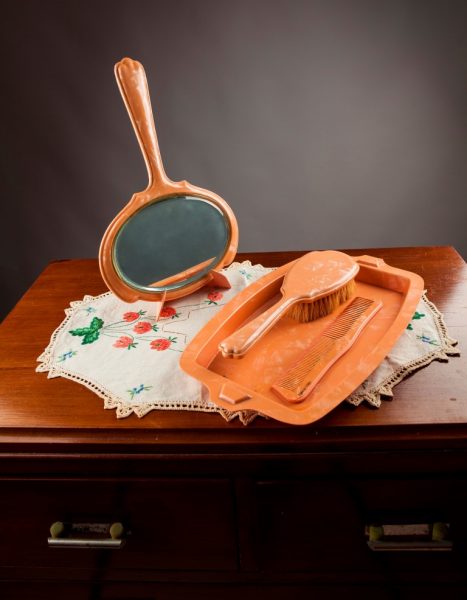 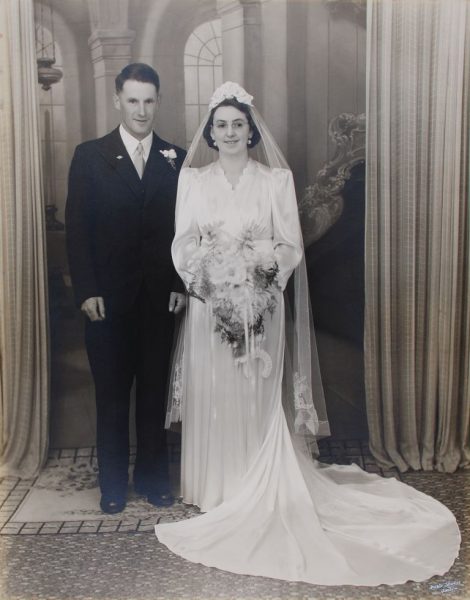 By the 1970s and the cultural changes that came with the feminist movement, the drive to for women to marry was not as strong. Women were able to work after marriage and items became cheaper to buy, so the urge to collect was reduced. [12]

The contents of Norma’s bottom drawer can teach us so much about New Zealand culture in the mid-20th century. We can learn about the values put on material objects as well as the importance of marriage for young women of the day. They also demonstrate the patterns and design of handcrafts, and the types of items deemed necessary in the family home.

Along with Norma’s memoirs and sewing diaries, her collection is a valuable social history resource.