The mystery of the Tarawera cats

Many people will remember the dried remains of a cat which had been displayed in Rotorua Museum in recent years. In fact it has been described as one of the museum’s most popular exhibits. Here is the story of the three Tarawera cats that were included in the Tarawera eruption displays at the Museum and elsewhere.

It all started when a member of the public phoned the closed museum in 2017 to ask if she and her family could come and visit the cat which had a connection to her great grandmother Kate Mays and dated from the Tarawera eruption. Although happy to oblige unfortunately we had to tell her that the latest cat did not date back to that time, but was in fact an exhibition ‘prop’ with no connection to Tarawera.

The story of the real Tarawera cat is far more interesting. According to her great granddaughter, Kate Mays had been staying in Rotorua not long after the Tarawera eruption and joined the first coach party to survey the destruction. In a boarding house near Tarawera she saw the figure of a cat crouching on a roof beam. She wanted to take it but the coach driver said it would turn to powder if she moved it, so she didn’t. The next day the driver, Charles Crowther, went back, got the cat, and donated it to the Tourist office.

This photo from our collection shows that cat. It was taken by Arthur James Iles, a local photographer. The caption reads: “The mummified cat from Tarawera eruption, found at Wairoa 1901 by C. Crowther, Rotorua”. If this is correct the cat was removed 5 years after the eruption. 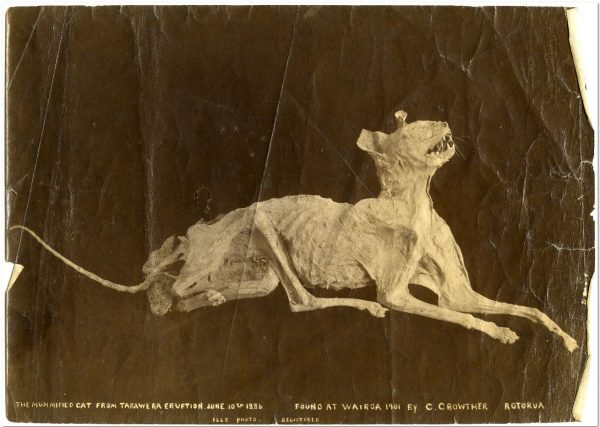 A second cat is shown in photographs of the Rotorua Museum when it was housed in the Civic centre from 1940 to 1960 (below).

This is clearly a different cat from the one shown above. The label reads “Mummified cat. Secured from ruins of Mr Haszard’s house after the eruption”. This refers to Charles Haszard the schoolteacher at Te Wairoa, whose house was destroyed in the eruption. He, his nephew and three of his children were killed.

In 1960 the collection went into storage due to space issues and the Council started to look at an alternative museum. In 1968 the objects were taken out of storage and moved into the south wing of the Bath House which then became the Rotorua Museum. Committee minutes dated 26 Nov 1968 state that the “Mummified cat from Tarawera” could not be found. 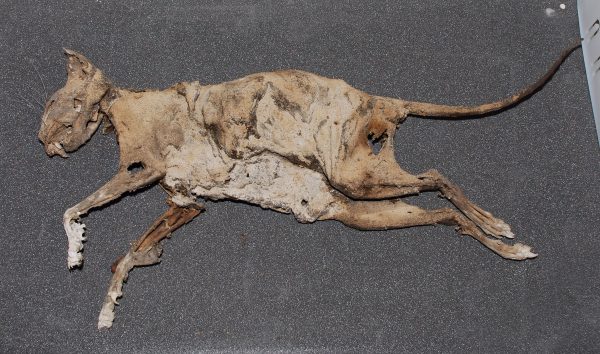 The third cat (above) is a museum prop that replicates its predecessors.