The Norma and Bob Evans Family Clothing Collection spans a period from about 1910 to the 1980s and consists of about 2000 items. It is a rich resource for researchers into the social history and technology behind clothes and clothing in the 20th century.

The collection includes clothes that had belonged to Norma Evans’ grandparents, parents, husband and daughters but mostly herself. Many items were made by Norma; sewn, knitted, woven, crocheted, and some were made by Norma’s mother Maud, an equally skilled maker.

It shows the changes in fashion styles over that time, especially from the 1940s to the 1980s which is the main coverage of Norma’s own clothes. It is also a fantastic record of fabrics over that time as well as buttons and buckles and how the clothing was made.

Norma had trained as a dressmaker and tailor and started her own business at age 18 in Kurow in North Otago where she grew up. In 1946 she married Bob Evans who had just come back from the war in the Pacific, and the young couple went farming in South Canterbury. A decade later Norma and Bob Evans and their four daughters migrated north to take up a farm block on the selenium-deficient pumicelands of Rotomahana.

The collection includes a wide range of garments, from hats, gloves, stockings, socks, underwear, school uniforms, coats, scarves, handkerchiefs, ties, trousers, aprons, even netball bibs. Norma’s own clothes were mainly dresses and skirts and tops – she rarely wore trousers. Of course the collection includes Norma’s wedding dress, her jewellery and accoutrements, along with one bridesmaid’s dress, bouquet, and all her husband Bob’s attire on the day. 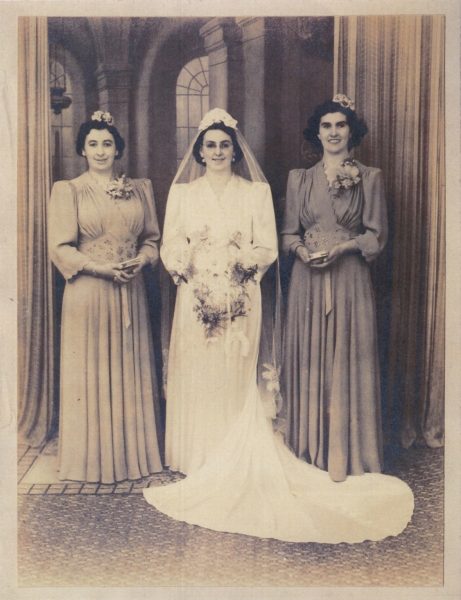 We even have the dress – her favourite – which she was wearing when she met Bob at an RSA dance in 1944. We know it was her favourite because Norma was able to supply the museum with the stories behind many of the garments, when and why she made them and at which events they were worn.

You might be wondering why Norma kept all these items. Partly it was because of necessity – due to financial constraints clothes were often re-made into other things, handed down from daughter to daughter, let down and worn and darned until they fell apart. But the main reason is that Norma was a social historian and wanted the family’s possessions to be kept as a social record.

One of the key stories about Norma and her collection is that of ingenuity and ‘making do’. One great example of smart thinking and determination is the story of the hat she made on the train on the way to her father’s funeral in the South Island in 1955. She decided to make a felt hat from two old hats. She had to steam the brim to roll it, so when the train was at a station she jumped out and steamed it on the steam outlets from the train. Then sewed the next part as the train carried on. She used one of her father’s leather punches to make the holes in the rim before she left. 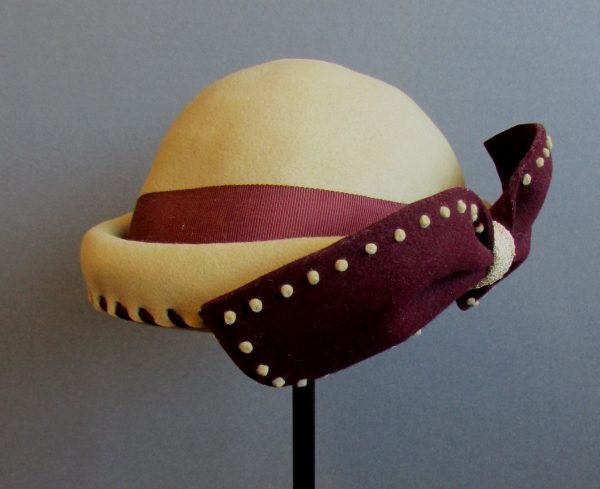 She also carefully recorded in sewing diaries the fabric, zips and buttons and what they cost for many of the garments she made. She wrote numerous books about her own and her ancestors’ lives. 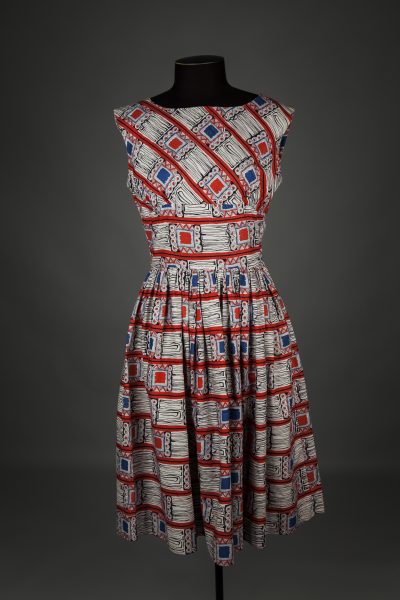 Later on Norma fully embraced the manmade when it came to sewing fabric and admired Terylene, Nylon and Crimplene for their easy care qualities and bright colours. This is a dress she made of flocked nylon for daughter Annette in 1959-60. 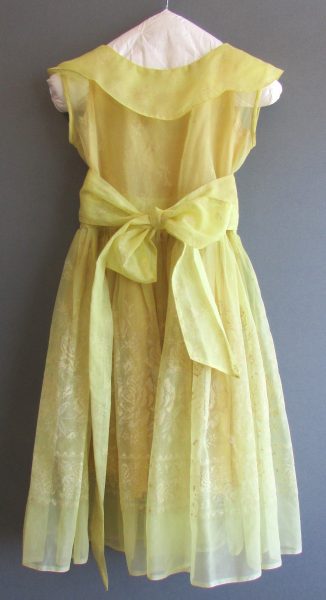 Norma was all about accessorising and made hats, bags and jewellery to match particular outfits.

The highlights of Norma’s jewellery collection are the numerous starburst brooches which she made with buttons, pins and a piece of tinfoil covered cork for the backing. She also sold these to supplement the family income. 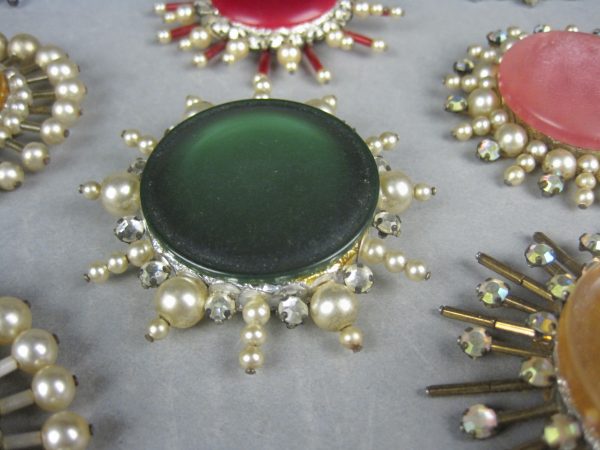 Norma has told us which clothes were worn by whom, which were recycled or up-cycled, and which were liked or disliked and why. Many of the clothes have been let down, or up, in or out according to circumstances. Some have been darned, some are stained and worn with use, but they show us how garments were made to last and were not throwaway items as they often are today.

Here in one collection you can find a range of skills which have now declined in popularity but were commonly held by women in the mid-20th century. Textile skills demonstrated by Norma in her collections include: hand and machine sewing, smocking, darning, knitting, crochet, embroidery, millinery, weaving, applique and more.

Norma died on the 18th of April 2017, aged 93. She had planned her funeral down to the last detail including which cakes and sandwiches would be at the afternoon tea, including her favourite – pink lamingtons.

Norma’s amazing skills and foresight as a social historian are her legacy in this exceptional collection at Rotorua Museum.

This is an edited version of an article written for Context – the journal of the Costume and Textile Association of New Zealand by Rosemary Deane, Collections curator – Social history.