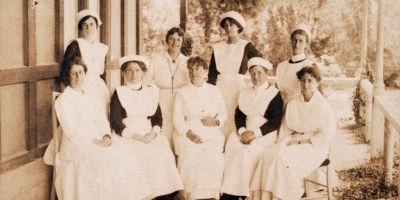 Over the years, a large number of men and women served as doctors, physiotherapists, masseurs and masseuses, nurses, attendants and maintenance personnel in the Bath House.

Dr JC Duncan was appointed the second Government Balneologist in 1919, a position he held until his death in 1942. During his years of service, Dr Duncan was known as a caring doctor who was enthusiastic about the benefits of thermal waters. He noted in his 1921 report: “Hydrotherapy has become an exact science capable of effecting cures that were previously considered impossible…”

Dr ATM Blair was the last Government Balneologist, appointed to the position in January 1943. He was not replaced after his retirement in 1957.

Born in 1886, Dr Blair was educated at Nelson College and graduated from Otago University in 1906. After studying at Cambridge University he joined the Royal Army Medical Corp in 1914. Dr Blair assisted Dr Duncan, taking over the position of balneologist after Dr Duncan’s death. Following his death on 4 April 1961 his obituary read: “We have lost a valued and much respected member of the local medical profession, a senior member who taught us much about the healing waters.”

Arthur White arrived in New Zealand from Kent in 1906 and began work at the Bath House as a physiotherapist in 1915. He continued in this position until 1957. His daughter Verna White recalls: “One year we decided to count how many treatments he had given in that year and it numbered between 3,000 and 4,000. During that time he had treated many influential people from all over the world.”

Arthur White died in 1981 aged 91. He had the foresight to save some of the therapeutic equipment, which has provided a valuable link to the Bath House’s past.

Born in Dunedin in 1911, James Meek trained as a physiotherapist and arrived in Rotorua in 1936. Doctors from all over New Zealand referred patients to Dr Duncan, who in turn prescribed treatments which James Meek and other staff carried out. James Meek’s treatment rooms were upstairs in the bay window overlooking the gardens. He treated about 8 to 10 patients each day, many coming back year after year. James Meek spent ten years at the Bath House before moving in to private practise.

Alice Robinson began her career at the Bath House as an Aix masseuse in 1939. The 20 year old Rotorua woman was trained for her role by Sisters Tyson and McTier. She remembers a rigorous routine which included washing a long corridor every day, and endless cleaning of the baths. Patients became Alice’s personal friends, and she also remembers celebrities coming to the Bath House for treatment. Alice left the Bath House in 1942. 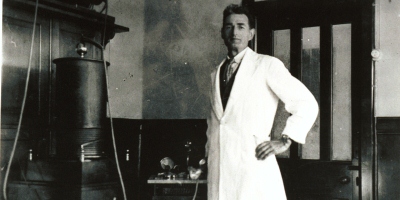 From the beginning, corrosion caused by acidic waters and hydrogen sulphide gas has made the maintenance of the Bath House a nightmare. Within days of the official opening the building was closed while white furniture was stripped and repainted. Lead used in the priming paint had reacted with hydrogen sulphide in the moist air and turned the white paint black.

“There is not one single line of piping that has been put down between the various pumps and the baths that has not proved useless when tried, and had to be replaced at great expense and after annoying delay.” AS Wohlmann to TE Donne, 22 August 1908.

Three months later two and a half foolscap pages had been recorded of defects in pipes, valves, shafts and other fittings.

These weren’t the only problems. Acidic water-vapour and steam caused corrosion. Plaster swelled and dropped, and in 1937, parts of the ceiling in the Women’s Priest Bath area fell in.

An on-going list of problems is recorded in copious reports, memoranda and press coverage over the years. Ian Rockell, former Rotorua Museum Director, recalled the building in 1959: “the place was blackened – a place out of hell. The building smelt: salty, dampness, sulphur, a decayed monster.” Source: Conversation with Ann Somerville, 1997. 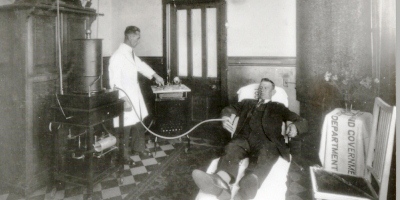 During the 1930s and 40s faith in spa treatments waned and the fashion for ‘taking the cure’ faded.

In 1947 the Health Department took over the management of the Bath House and the Tourist Department began to promote other attractions. Tourism is not mentioned in articles that Dr Blair, the third balneologist, wrote for medical journals in the 1940s. Spa treatments came to be seen as complementary to work done in hospitals.

The Health Department’s annual report of 1949 contained a damning statement that hastened the closure of the spa.

Its writer was Rotorua’s new Director of Physical Medicine, Dr GAQ Lennane: “The old fashioned spa conception, a conception of treatment which has been responsible for the delayed knowledge of the treatment and cause of the rheumatic diseases – had to be abandoned, and the further exploitation of the mineral waters of Rotorua as miraculous cure-alls could not be condoned by the Health Department. A more rational and scientific outlook required to be developed.”

In 1963 the Rotorua City Council assumed control of the Bath House and in 1966 all treatments were transferred to nearby Queen Elizabeth Hospital.

Today Rotorua Museum is the guardian and tenant of a building that holds a Category 1 listing under the Historic Places Act. 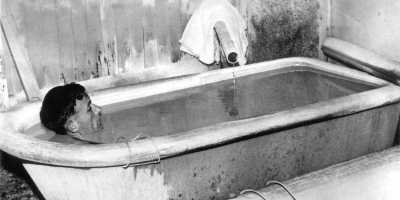