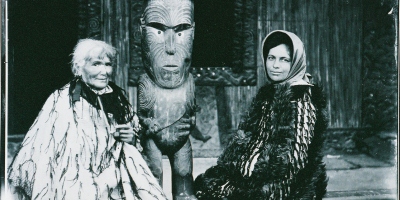 The People of the Land

Legend says that Ngātoro-i-rangi, the navigator priest who came to Aotearoa with the Arawa canoe, drew fire to warm himself on the frozen slopes of Tongariro. He also trapped the feared sorcerer Tama-o-Hoi in the depths of Mount Tarawera.

Te Arawa people settled in the area, sometimes living peacefully, sometimes at war with other tribes for the rich resources of the area. Over many generations they buried their dead on the slopes of their sacred Tarawera maunga (mountain).

Sometimes Rūaumoko (ancestral god of earthquakes) groaned deep within the earth, causing the ground to shake, and reminding people of the volcanic power below.

In 1843 Seymour Mills Spencer and his wife Ellen established a Christian mission station on Tauaroa, a rocky headland on the shores of Lake Tarawera. They named it Karirī or Galilee. The Spencers later shifted to the more fertile valley of Te Wairoa.

Early travellers helped spread the fame of the area’s wonders to an eager Victorian world. Ohinemutu on the shores of Lake Rotorua became a stopover on the way to the terraces, and Te Wairoa grew into a bustling village of around 150 people.

Tourism in New Zealand was born here. By 1860 the Tūhourangi people were organising day trips to the Terraces. At Hinemihi meeting house in Te Wairoa the eyes of the carvings were replaced by gold sovereigns as the people grew rich.

There is a darker side to the story. These were times of upheaval and crisis for a Māori society undergoing tremendous change. The unprecedented wealth was easily spent, and alcohol and illness took their toll as people became dependent on a cash economy.

Tuhoto Ariki, a tohunga (priest) of great power, warned the people that disaster could follow. The sighting of a phantom canoe ten days before the eruption confirmed his fears for the area ‘He tohu tērā arā ka horo katoa ēnei takiwā – it is a warning sign that all will be overwhelmed’. 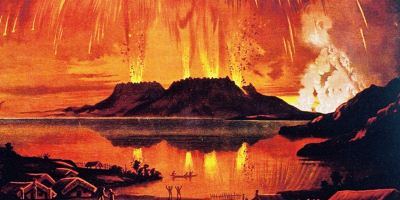 The night of 9 June 1886 was cold and clear. In the early hours of the following morning, 10 June 1886, Mount Tarawera erupted.

By 2.30am its three peaks were in eruption, columns reaching thousands of metres into the sky. Basalt magma mixed with the hydro-thermal system under Lake Rotomahana and at around 3.20am the bed of Lake Rotomahana blew out. Nearby villages of Te Ariki and Moura were buried under a scalding pyroclastic flow.

The settlement of Te Wairoa was almost completely destroyed by falling rocks and mud.

At the schoolhouse Charles Haszard, his family and guests were awoken around 1am. They gazed in awe across the lake at the crimson glow above Tarawera. As they watched, a dense black cloud rose above the glow, lit by a tremendous display of lightning.

A guest, William Bird, recalled the scene vividly: ‘Lake Tarawera was a copper mirror, reflecting the mount from base to summit in a lurid glare. Dominating all, hung the great cloud-curtain, gloomy and dark above, saffron and orange on its under-surface. From the cloud, great balls of flaming rock dropped from time to time, descending with a splash into the waters of the lake.‘

The awe of the watchers quickly turned to fear. A hail of stones began to rain down. A strong wind was accompanied by the deafening roar of smashing windows.

The death toll will never be known exactly; but around 120 people died that night. Guide Sophia Hinerangi later estimated that 62 people had survived the night with her sheltering inside her whare (house). Five members of schoolmaster Charles Haszard’s family perished and a young English guest named Edwin Bainbridge died under the falling verandah of the Rotomahana Hotel. 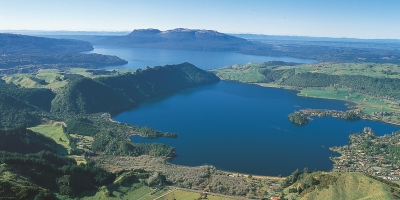 A Time of Grief

The grief following the eruption was terrible for the Tūhourangi and Ngāti Rangitihi people. They lost family members, their livelihood and the bones of their ancestors in one terrible night.

Many survivors of the eruption were offered land to resettle at Whakarewarewa and Ngapuna in Rotorua, and their descendants still live there today.

Rotorua is very close to the place where great tectonic plates meet. The land has been moving here for thousands of years and continues to do so.

Scientists measure volcanic activity, keeping an eye on the restless earth for signs of the next eruption.

Tourists from all over the world still visit Tarawera, many transported to its summit by descendants of those who guided early visitors to the terraces. 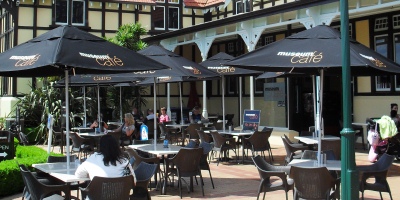